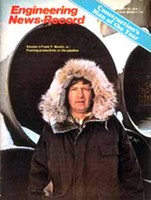 Moolin worked on various projects including a refinery in Singapore and San Francisco's Bay Area Rapid Transit System.[3] After finishing work on the pipeline, Moolin started a construction consulting company. He also served as chief executive officer for the conglomerate Alaska International Industries, and became a vice president of Western Airlines. He was awarded "Construction's Man of the Year" by Engineering News-Record magazine.

In 1982, he died of leukemia. Shortly before his death, he stated:

Perhaps I am being immodest, but I believe that in my career, I have accomplished many things. And foremost among them is the successful construction of the Trans-Alaska Pipeline System. I am confident that history will place the TAPS project among the highest technological achievements of engineering and construction. We had a very tough job to do, and we did it well.