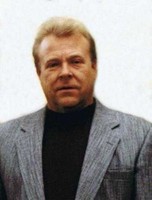 He was born June 20, 1949, to James and Betty (Mittelstadt) Hart in Eau Claire, Wisconsin. He attended St. Patrick’s Grade School and Eau Claire Regis High School, and worked at Uniroyal for several years. In 1974, he moved to Alaska to work on the Alaska pipeline, first at the Isabel Pass Base Camp and later accepting various positions of increasing responsibility in materials management director at Alyeska Pipeline Service Company. Jim’s many passions included sitting on the Board of Directors for the Yukon Quest, other volunteer activities, and riding his lawn mower on the banks of the Badger Slough in North Pole, Alaska. Jim was united in marriage to his wife, Cindy Cutler, on December 31, 1977. Jim and Cindy made their home in North Pole, Alaska, for more than 25 years before relocating to Eau Claire in 2002, following the death of Jim’s brother, John Patrick Hart, in the September 11, 2001 terrorist attacks on the World Trade Center.

Jim had a special place in his heart for his dogs, Mattie and Heidi.

Jim's family would like to express a special thanks to Dr. Nambudiri and the nurses at Luther Hospital who took such good care of Jim during his many visits. He called you his Earth Angels.