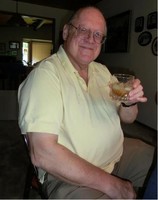 Richard Louis "OD" Odsather, age 71, died on November 28th with his wife and sons by his side. He fought a valiant fight against thyroid cancer.

OD was born in Anchorage to Louis and Estella (Irwin) Odsather on Sept 29th, 1941. As a kid he had a paper route, enjoyed scouting becoming a Sea Scout, and was active in DeMolay. His love of water skiing, in reality and in jest, began with time spent at his family's cabin on Wasilla Lake.

He attended Anchorage High where he particularly enjoyed playing football and skiing. After graduating in 1959, he enrolled in UAF where he studied Engineering Design and Arctic Engineering and competed on the UAF Cross Country Ski Team. His studies were interrupted to help his father build an office building in downtown Anchorage and were further interrupted when he was drafted in the Army. It was while serving in Korea that he pursued Tae Kwan Do, achieving a second degree black belt. Returning to the States, he was assigned to Fort Greely where he took great delight in being able to manicure' the runway with every piece of heavy equipment he was licensed to operate.

He taught karate to the officers in the Anchorage Police Department before returning to UAF where he graduated in 1970. While at university he met his future wife Shirley Drury.

During the early stages of pipeline design, OD developed insulated roadways and specialized in building foundations designed to resist the harsh forces of permafrost. He received several patents for these innovations. He continued working on pipeline design creating new methods for the pipe to interact with vertical support members. Bechtel transferred him with his family to the San Francisco area on two different occasions, but he always returned to Alaska.

He worked for the State of Alaska at DOT PF, was the Chief of Right of Way and became Deputy Director in the State Pipeline Coordinators Office. He was passionate about the rights accorded to Alaska at the time of Statehood and was particularly proud of his work helping to establish access corridors throughout the state.

After retirement, consulting took OD to Russia and China and led him to work with the Alaska Natural Gas Development Authority.

OD and Shirley built their home in Fairbanks where they raised their two sons Jon and Erik. He became very involved with the Boy Scouts and Fairbanks Youth Soccer as the boys grew up. Cross country skiing was a source of great pleasure and he was so pleased that his sons took up racing in High School.

His grandchildren were a great source of excitement and pleasure. He took great interest in all their activities and loved to joke and encourage their mental strengths.

He is survived by his wife Shirley; son Jon and his wife Missy, son Erik; grandchildren Taylor, Mason and Aislynn; his brother Ken and his wife Gay; his nephews Norman and Martin; sister Kathy; cousin Steinar Hansen; brother-in-law Bill Drury and his wife Barbara, and nieces and nephews Rose, Sarah, Tim, Ben and Jenny.

OD will be remembered for his tremendous sense of humor. He had a joke for everyone and every occasion. He had a way of bending a story and catching his audience off guard especially if he used one of his voice disguises.

The family would like to thank Dr. J. Cox, Dr. Shihadeh, Dr. Kim, Dr. Triplehorn and all their staff as well as the Doctors, Nurses and health care providers in the ICU at FMH.

Now that the trials of probationary state are over, and he is beginning his final journey to the Great Architect of the Universe, may he be admitted to the temple not made with hands internal in the heavens. So Mote it be.