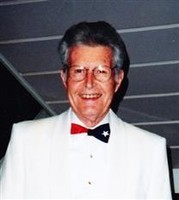 James Francis McPhail, 83, of Houston, Texas passed away on Sunday April 25, 2010. He was born on June 1, 1926 in Pine Bluff, Arkansas to Malcolm and Gaye McPhail. James graduated from Odessa High School in Odessa, Texas. Mr. McPhail served in the US Army during WWII in the Philippines. James married Clarice McCasland in Big Spring, Texas on June 5, 1948. She was his lifelong companion and the love of his life. He then graduated from Texas A&M with a BS degree in Civil Engineering in 1949. James went to work for Humble Oil & Refining Company in Kingsville, Texas in 1949. His 37 year career with Humble/Exxon was a source of great pride and accomplishment. James career took him and the family to the corners of the world, including Alaska, Australia, and Norway. His proudest accomplishment was his role as Vice President of Engineering for Alyeska Pipeline service Company in Building the Trans- Alaska pipeline. James and Clarice enjoyed Cruising and traveling to visit their many friends and family. He also enjoyed his volunteer work at Southwest Memorial. The family would like to thank the wonderful staff at Garden Terrace Alzheimer's Facility for their loving care of James for the past seven years. James was preceded in death by his loving wife on July 27, 2006. He is survived by his son, Terry and his wife Samantha; his daughter Candace DuFour and her husband Daniel; five grandchildren, Brandon, Courtney, Brett, Adam, and Lindsay; and three great-grandchildren. Funeral services will be held at 2:00 PM Wednesday April 28, 2010 at St. John Presbyterian Church, 5020 W. Bellfort St. Houston, Texas 77035. Entombment will follow at Memorial Oaks Cemetery. In Lieu of flowers, anyone interested in making a donation is encouraged to donate to the Alzheimer's Association of Texas, 2242 West Holcombe Blvd. Houston, Texas 77030, or phone (713) 266-6400.