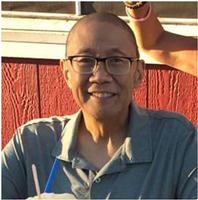 Saturnino "Satch" Tapangco passed away on Dec. 2, 2019, in Valdez, Alaska, with his family at his side. After a 2 1/2-year battle with colon/liver/lung cancer, his body succumbed to this ugly disease.

Satch was born on Jan. 9, 1960, in Wahiawa, Hawaii, to Crispina and Saturnino Tapangco Sr. Satch was the only boy raised with six other sisters, so as you can imagine he was a little spoiled. After graduating from Leilehua High School Class of 1978 in Wahiawa he attended St. Martin's College in Lacey, Wash., where he met his future wife Karen in 1979.

After moving to Anchorage, Alaska, in 1984, he worked as the Quality Control for Matanuska Maid Dairy until he moved to Valdez, where he gained employment with Chugach North and eventually through the years he changed employment to Alyeska Pipeline Service Company. Satch was given the opportunity for employment with Intertek Alaska in 2010. Satch enjoyed working at the North Slope, and most recently in Valdez as the Lab Manager with Intertek Alaska at the Valdez Petro Star Refinery.