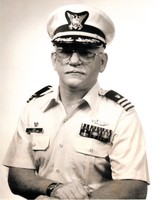 Rick grew up in Wake Forest, N.C. He was a graduate of Carolina Military Academy in Maxton, N.C. Rick joined the United States Coast Guard in 1965. He had a distinguished career for 26 years. He retired as a Commander in 1991.

Rick then moved to Valdez, Alaska, and went to work for Alyeska Pipeline Service Company and retired in 2011, after 20 years.