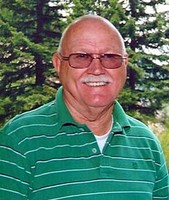 Jerrell C. Crawford, 80, of Mont Belvieu, Texas, peacefully passed away on Monday, August 24, 2015 at his home in Mont Belvieu surrounded by his family. Jerrell was born in Hobbs, New Mexico on December 4, 1934. Although he was born outside of Texas, there has never been a man more Texan. He graduated from Abernathy High School in 1953 and married Nan, the love of his life, that same year.

Jerrell had a long career with Exxon Pipeline Company as a mechanic retiring in 1995. His legacy continues today with 2nd and 3rd generations following in his footsteps. The highlight of his career was his opportunity to work on the Alyeska Pipeline in 1994.

Jerrell and his wife Nan have a large family that mean the world to them. His character and wisdom will be passed on for generations to come. He never missed a family gathering and always welcomed new friends into the Crawford clan. He was a simple man. Enjoyed a good western. Only gave his opinion when asked. Cherished his wife above all else. And never had a bigger smile than when surrounded by family and friends.