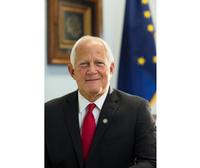 Christopher Jim Birch passed away on August 7, 2019, after 68 years of loving his family, friends and the State of Alaska. Chris was born on August 28, 1950, in Sterling, Illinois.  His father, Frank, first came to Alaska in 1944 when he served in Adak with the U.S. Marine Corps. After the war, he returned to Alaska with his wife, Bettijeanne. Frank worked as a mining engineer and Bettijeanne as a geologist, camp cook and bookkeeper in placer and hard-rock mines around the Territory, then State. When the couple was expecting their first child, Chris, they were employed at the Independence Mine at Hatcher Pass. Chris and his sisters grew up in camps near Fairbanks and in the Brooks Range.

Chris earned a Bachelor’s degree in Mining Engineering in 1972, and a Master of Science degree in Engineering Management in 1979, both from the University of Alaska in Fairbanks

On September 2, 1978, Chris married the love of his life, Pamala Bushey, and they started a family in Fairbanks. In 1991, the family moved to Anchorage when Chris took a job with Alyeska Pipeline Service Company. Chris retired after 30 years with the State of Alaska Department of Transportation in 2003. Over the course of his career, Chris was the Airport Manager for the Fairbanks International Airport, the Director for Engineering, Environment and Facilities for the Ted Stevens Anchorage International Airport. He also spent time working for NANA Development Corporation.

Chris’s penchant for fixing things led him to public service. Beginning in 1984, he served two terms on the Fairbanks North Star Borough after initially deciding to run because he was unhappy with the road maintenance near his home. After a move to Anchorage in 1991 for work, Chris continued to serve his community. Over the years, Chris served on the Board of Hilltop Ski Area, the Chugach Electric Board, and the Anchorage Municipal Assembly. He was also a member of East Anchorage Rotary, the Resource Development Council, Amazing Grace Lutheran Church and numerous other organizations.

In 2016, Chris ran for the State House, where he served one term before moving on in 2018 to the State Senate. Chris was a passionate advocate for the State of Alaska. He believed that with responsible leadership and compromise, the State’s best days are ahead of us.

Chris is survived by his wife, Pam, his son and daughter-in-law Logan and Heather Birch, and his daughter and son-in-law Tali Birch Kindred and Josh Kindred, his four grandchildren, Mason, Ellie, Oliver and Evie (all of Anchorage, Alaska), as well as his sister and brother-in law Sue and Kevin Sharp (Castle Rock, Colorado) and his sister Carolyn and Masa Miyake (Kyoto, Japan), and their families. Chris was preceded in death by his parents, Bettijeane and Frank Birch, and his son, Jordan Birch.

A celebration of a vibrant life is scheduled for Thursday, August 15 at 3:00 p.m. at Hilltop Ski Area in Anchorage, Alaska. All those who knew and loved Chris are welcome to come and share community, camaraderie, and coffee, just as Chris would have wanted. In lieu of flowers, the family asks that donations be made to Lutheran Social Services of Alaska.