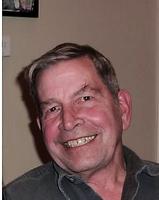 As an engineer, Wade came to Alaska in the mid-70s with Gulf Interstate to build the trans-Alaska pipeline. Since then he has been involved in many of Alaska's major projects. For 15 years Wade has been an integral member of the 611th Civil Engineer Squadron, critical in sustaining facilities and infrastructure at Eareckson Air Station Shemya, and also 13 other long-range radar sites throughout Alaska as the primary engineer. To honor Wade for his years of devoted service, plaques will be affixed to two of Wade's favorite rooms. His room, "Wade Auld Suite," and the rec room, "Governors Lounge," as he was affectionately called Governor of Shemya. Other awards include Meritorious Civilian Award July 2019, and in honor
of Wade a U.S. National Ensign Flag was flown over Eareckson Air Station and presented to Wade.

Wade spent all of his free time outdoors, fishing, hunting and skiing.

In loving memory, Wade is survived by his wife, Sue; his sons, Wade III and Greg; his stepdaughters, Ursula, Dorothy and Brandi; son-in-law, Kevin; and five grandchildren. His family and friends will dearly miss his big smile and welcoming personality.