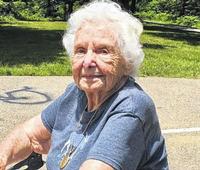 Joanne was born on April 20, 1930, in Portsmouth, Ohio, the daughter of the late John Baber and Lorena Elizabeth (Lane) Baber. On June 12, 1953, she was united in marriage to Gerald Humphrey, who preceded her in death.

She was preceded in death by her parents and husband.

Joanne was a secretary, member of Eastern Star and Ladies Oriental Shrine.

The family received friends from 11 a.m. until the time of the service on Monday.