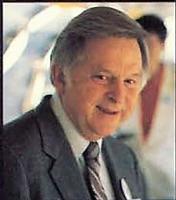 Frank Turpin, who spent his career at Exxon Mobil before heading the Alaska Railroad and serving as state transportation commissioner, has died. He was 82. He died Thursday in Texas after a stroke.

Turpin worked 37 years for Exxon Mobil, starting in 1947. He finished his oil career as president of Alyeska Pipeline Service Co., an Anchorage consortium of oil companies that own the 800-mile trans-Alaska oil pipeline.

In 1985, Turpin became the first chief executive of the Alaska Railroad after the federal government sold it to the state for $22.3 million. Five years later, Gov. Wally Hickel appointed him transportation commissioner. Turpin held the post until 1993, when he retired.

According to friends, Turpin died in Houston, where one of his five children lives, but made his home in Kerrville, Texas, northwest of San Antonio. "Turpin was a man that you could trust," said Hickel, reached Friday at his Anchorage home. "He understood what I call the owner state, the government's obligation to the land. He understood it and he did a good job."

Turpin grappled with some controversy during his time in state service. One was the railroad's plan to use herbicides to control weeds on the tracks, said Eagle River resident Vivian Hamilton, a public relations employee under Turpin at Alyeska as well as the railroad.

Another was his involvement with Hickel's attempt to bulldoze a rough road along the remote Copper River to Cordova.

But Hamilton said Turpin was a sharp businessman, capable of solving issues. He was proud of pulling the railroad's seven labor unions under one contract, greatly simplifying negotiations, she said.

In Kerrville, Turpin was actively involved in civic organizations, including Rotary International. He was also an active member of Riverhill Country Club and First United Methodist Church.