Originally from Miskin Rd, Trealaw, Rhondda and latterly of Meadow Rise, Swansea has passed away, after a short illness, on Jan 20, 2014.

He lived a very full life, having represented Wales playing rugby in 1945 and gaining a PHd in Cardiff University in 1949. Most of his career was spent working for BP building several refineries, and then heading the department responsible for, all of their refineries worldwide during the 1970s and, most significantly, he was President of the consortium that built the Trans-Alaska Pipeline.

He was the beloved husband of the late Kath, the ‘old-man’ always to Paul and Joce and dear Grampy to Owen, Jo Mike, Alex and Daniel.

William Darch: Former Wales rugby player who led the construction of the trans-Alaska pipeline has died. 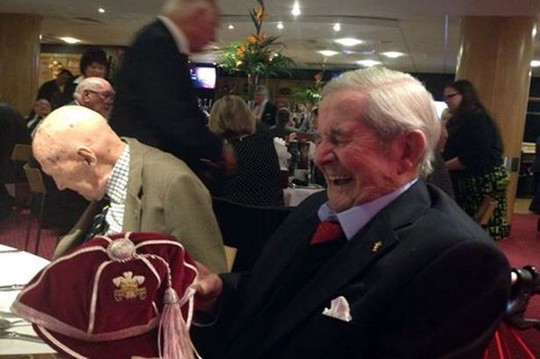 Bill Darch who led the construction of the Trans-Alaska Pipeline. and played rugby for Cardiff and Wales. Bill is pictured with his international Cap

A former Wales rugby player who led the construction of the trans-Alaska pipeline has died.

He played for Wales in 1945 and last November the WRU awarded special presidents’ caps to 25 players who played in non-test matches, including Dr Darch. “

He was one of a kind,” Jocelyn Darch, 56, said of her father, who grew up in the Rhondda. “My father came from very humble beginnings but he was really smart and a great sportsman.”

Dr Darch obtained a degree and PhD from Cardiff University in the 1940s before he went to work for BP.

He started his career at Llandarcy Oil Refinery and worked his way up. During his career, he commissioned BP refineries in Australia, Toronto and Montreal, travelling with his family in tow.

“The weather was so cold [in Canada] that he had to overcome all sorts of problems to keep the oil flowing through the pipes,” said his daughter. “His solutions were quite innovative and he became a pretty big expert in refineries.”

After this, Dr Darch became the head of BP’s world-wide refineries, which led him to become president of the consortium that built the trans-Alaska pipeline – one of the world’s largest pipeline systems, running 800 miles from wells at Prudhoe Bay to the port of Valdez.

“At one point, they had to change the design because the environmentalists said it was blocking the annual migration path of the caribou,” added Ms Darch. “Now, the pipeline is the only manmade object that can be seen from space apart from the Great Wall of China.”

Aside from his professional life, Dr Darch’s daugthter said he was “always full of fun” and a great sportsman.

He enjoyed a 50-year marriage to his beloved wife Kath, who passed away around 10 years ago and will be missed by his children Jocelyn and Paul as well as grandchildren Owen, Jo, Mike, Alex and Daniel. .

Published in WalesOnline on 17 February, 2014