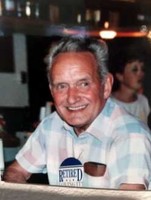 George Warren Frigon, 87, passed away peacefully at home on June 29th, 2016 with his daughter, Linda by his side.

Warren enjoyed fishing, woodworking and photography. He also enjoyed going to the VFW with his good friends of many years where he enjoyed his favorite drink, Scrap Iron.

Warren is preceded in death by his parents, brothers and sisters. He is also preceded by his son Robert, daughter Deborah, and Wife Kathy.

In lieu of flowers, donations may be made to an animal shelter of your choice