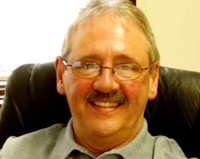 Longtime Alaska resident Leonard J. O'Hanley passed away suddenly due to a pneumonia-related infection on Feb. 28, 2018. Lenny was a registered Professional Land Surveyor and had worked both in the field and in managerial roles across Alaska since 1975. At the time of his death, his survey license registration was the one used as matter of record on the Trans-Alaska Pipeline System (TAPS).

Surviving friends and relatives have been particularly affected by Lenny's sudden passing. Several have commented on his extraordinary kindness, generosity and warmth of spirit. Lenny was always known to offer an easy ear to talk to and was an empathetic friend to anyone experiencing hardship. Anyone who knew him would also be quick to point out his avid love of sports, especially Major League Baseball, college hockey and Formula One racing. Some of his most fond memories occurred peering into the Green Monster as a child; freezing at Candlestick and later celebrating at Pac-Bell Park when the Giants won the Pennant; and watching Grand Prix racing with close friends in Montreal, Canada.

Lenny's adventurous spirit prompted him to drive to Alaska from Boston along with his former wife, Clarissa; his dog, Hobo; and her cat, Elsa, in their blue Ford van in 1975. They had planned only to stay for a year, but even 43 years later he felt Alaska was the best place in the world to call home. They built a house in Palmer with beautiful views of Pioneer Peak, and eventually he moved to downtown Anchorage, where he could bike down to Mulcahy to catch a game and enjoy annual horse-drawn carriage rides on Christmas Eve with his closest friends and family.

Lenny will be missed most of all by his adoring daughter, Tara, and devoted grandson, Luke. Teddy and Oso come in a close second.

A notice from Alyeska Corporate Communications also added, "a celebration-of-life potluck gathering and salmon bake will be held in Anchorage on June 9, 2018. Friends and colleagues are invited and encouraged to join."